Heavy downpours across the United Arab Emirates have brought much of the country to a standstill, breaking a 24-year record for rainfall in the region. The impact has been so severe that the Ministry of Infrastructure Development has allocated 20 task forces to monitor the situation, with people fearing for their businesses and livelihoods.

A spokesman for the federal authority explained: “The teams have been assigned to deal with three main tasks, which include the drainage of waterlogged roads, removing mud and heavy debris, as well as repairing roads that may have been damaged by the rain.”

Unsurprisingly, the last few days have been extremely busy for our Khansaheb Sykes engineers who have been working tirelessly to ensure the effects of flooding are minimised. 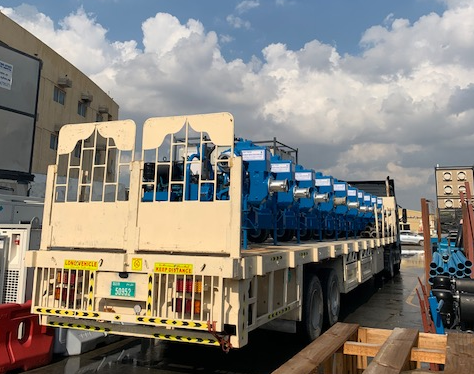 A trailer carrying 10 of our GP150M dewatering pumps was delivered to Ras Al Khaimah Municipality – one of the seven emirates that make up the UAE. These pumps are being used to remove flood water at numerous locations within the state and are providing vital relief to people based there.

Additionally, more than 50 dewatering pumps have been supplied to companies located within the worst affected areas and these are predominantly being used to remove surface water.

Ironically, the weather has been so severe that our own depot in Abu Dhabi has been affected. Fortunately, we have the means and resources to tackle the flooding and have been using our equipment on site to remove tens of thousands of litres of water.

While demand for our pumps has naturally surged, we have also provided drying equipment to a number of businesses in the area. The Midfield Terminal Complex within Abu Dhabi International Airport was badly affected by dampness, prompting us to arrange the hire of 20 building dehumidifiers which will accelerate the drying process.